Dangerous Effects of Water on Appliances and Electronics 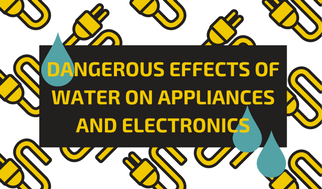 Dangerous Effects of Water on Appliances and Electronics

A year later and this information is still relevant. Our home state of Florida is just beginning the long recovery process from the deadly impact of Hurricane Michael and it appears that with a warming climate, water related weather events are becoming more frequent and more powerful. As we speak, the Texas hill country is bracing for yet another round of flash floods.

My wife and I were very lucky. Our home and businesses are intact. What little damage we had is trivial. Others were far less fortunate. Their homes were severely damaged or destroyed and it will take weeks, months or sometimes even years to recover.

One of the myriad of issues following a hurricane is water intrusion and water damage, specifically related to electrical and electronic fixtures, appliances and equipment. During a hurricane the contents of a home or building can be exposed to water by submersion in storm surge, a downpour through a rough roof or wall breach, or even small amounts of water through leaking windows and doors. The old adage about not mixing water and electricity holds true not only during the storm, but long after as well.

Most electrical devices (also including electronic items) were not designed for, nor were ever intended to be exposed to water. Water acts as a catalyst for corrosion of metals. It helps to speed up the oxidation of metals that would normally occur very slowly in air. Water containing impurities, such as salts, can accelerate oxidation much more. Water containing impurities, in the presence of an electrical current, can exponentially speed up oxidation to the point where we can watch metal conductors corrode and erode right before our very eyes.

As electrical conductors corrode, their resistance to carrying an electrical current increases. When resistance in the circuit increases,  energy lost is overcoming the resistance, and that energy is converted into heat.  Heat also speeds up the corrosion of metals.

This is the crux of the problem. Water causes corrosion in electrical circuits. Corrosion creates resistance, resulting in heating of the circuit, which causes additional more corrosion. The cycle of heat and corrosion can continue to the point where the conductors become hot enough to ignite surrounding materials.  Left unchecked, the electrical or electronic device can be the start point of a fire.

This is particularly true where conductors are joined by mechanical means such as a cord plugged into wall receptacle, at wire nuts inside of junction boxes, or push on wire terminals inside of appliances.

When it comes to electrical and electronic components, “sitting it out to dry” may not be enough. Corrosion may have already occurred before any attempt was made to power up the device. Water and contaminants can work their way into microscopic crevices that can never be fully dried or cleaned. A device or appliance may appear to be OK and work satisfactorily after sitting out in the sun for a few days. The reality, however, is that it could be a incendiary time bomb waiting to go off weeks, months or even years after the storm.

Here’s the bottom line.  If it’s been wet or underwater, have the device or appliance professionally cleaned and dried.  If it’s not worth the cost of professional services, you’re probably better off getting rid of it.

And please consider recycling your devices instead of sending them to a landfill!

This site uses Akismet to reduce spam. Learn how your comment data is processed.